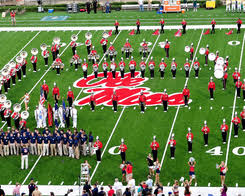 Buy Ole Miss Rebels Football tickets by selecting the game from the Ole Miss Football 2018 schedule listed below. At SecSeats you'll find an extensive variety and one of the largest selections of Rebel Football tickets on the web. SecSeats has Ole Miss football tickets available for purchase for all Ole Miss home games in Vaught Hemingway Stadium, the Chick-fil-a Kickoff game, road games across the south, SEC Championships, Bowl and National Championship Games including the new College Football Playoff. Please contact us if you need any additional information or have any questions about ordering tickets to Ole Miss Rebel Football games.

Ole Miss Rebels Football finished the 2015 season with a 10-3 record and ranked an impressive 10th in the AP Top 25 poll. Ole Miss had a strong start to the season winning their first four games, including two dominating defeats of 76-3 and 73-21 over UT Martin and Fresno State, and a surprising 43-37 win over the Alabama Crimson Tide for the second year in a row. The Rebels winning streak then came to an end when rival Florida Gators defeated them in a final score of 38-10. The worst moment of the year was an agonizing 53-52 defeat by Arkansas in overtime, which would ultimately end the chance for Ole Miss to compete in the 2015 SEC Championship game. They went on to play in the 2016 Allstate Sugar Bowl besting the Oklahoma State Cowboys by a score of 48-20. Ole Miss did a fine job securing a top recruiting class in 2016, closing out National Signing Day with 24 commits, 13 of which were ESPN 300, ranking them 3rd in the SEC according to ESPN and 247sports.com. Signing No.1 offensive tackle Gregory Little to replace Laremy Tunsil was a key move for the Rebels. They have quite a few pending departures this upcoming season that could impact their competitive streak, but for now it appears the future is bright in Oxford.

The Ole Miss Rebels will not be hosting their annual spring game this year due to construction on the north endzone along with the field being replaced with natural grass. Ole Miss Rebels Football team will open their 2016 season on September 5th in Orlando, FL against the Florida State Seminoles. The Rebels will follow by hosting four home games against the Wofford Terriers, Alabama Crimson Tide, Georgia Bulldogs, and Memphis Tigers at home in Vaught-Hemingway Stadium. Throughout the remainder of the season, Ole Miss will host the Auburn Tigers and Georgia Southern Eagles. On the road, the Rebels will travel to face Arkansas, LSU, Texas A&M and Vanderbilt. The infamous Egg Bowl against Mississippi State Bulldogs will close out the season for Ole Miss on November 26th in Oxford.

Ole Miss has once again proven they have the potential to do special things in 2016. Don't be surprised if Ole Miss is contending for a bowl game or even attending the SEC Championship game in the near future. Be there to support Coach Freeze and the Rebels this 2016 football season by getting your tickets from SecSeats.com.

Ole Miss Rebels play their home football games at Vaught-Hemmingway Stadium on the campus of the University of Mississippi in Oxford. Vaught-Hemmingway Stadium first opened in 1915 and is named for Legendary Head Coach Johnny Vaught and Judge William Hemmingway. Ole Miss originally played a significant portion of their rivalry and high profile games at Veterans Memorial Stadium in Jackson, MS. Beginning in the middle 90’s, all of Ole Miss’ football games began being played in Vaught-Hemmingway. With the expansion in 2016, the capacity will be at a little over 64,000 fans.

Ole Miss and Mississippi State annually play their final game of the season for the Battle for the Golden Egg or known as the “Egg Bowl”. The Rebels and Bulldogs have met 112 times with 88 times being as the “Egg Bowl”, overall Ole Miss leads the series 63-43-6. There is no love lost between these in-state rivals. Prior to kickoff in the 1997 game, a melee erupted between the schools and each had to be separated by the Mississippi Highway Patrol. Ole Miss has held the trophy the past two years.

LSU-Ole Miss, now known as the “Magnolia Bowl” was first started in 1894. The Tigers and Rebels have met 104 times with LSU holding a 59-41-4 advantage. Often yelled throughout the stadium a fan attending will hear “Go to Hell Ole Miss” or “Go to Hell LSU” as the rivalry lives between these border state foes. Memorable games include the 1959 Billy Cannon’s Halloween run, the 1972 Jones to Davis Touchdown pass dubbed as “The Night the Clock Stopped”, 2003 Ole Miss-LSU battle for the SEC Championship game birth when Eli Manning fell on the final play of the game, and the 2009 game LSU fans know as the “Clock it Game”. This year’s game will be played in Tiger Stadium in Baton Rouge.

Tailgating at Ole Miss is some of the best in the nation. Considered by many as the ultimate tailgating spot across the entire nation college football is “The Grove”. The Grove is approximately 10 acres and is filled with ancient oaks, beautiful elms, and magnolia trees. Contradictory to most college tailgates, Ole Miss supporters tailgating in The Grove dress in Sunday best and tables represent those found in exquisite fine dining establishments. While attending a game at Ole Miss make time to explore the Grove for the pageantry of college football in the South.

Ole Miss Sports Board from Secrant.com