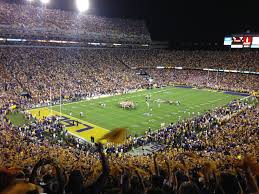 Choose your 2018 LSU Tigers football tickets for all the home and away games from our impressive selection at our website. SecSeats.com offers a variety of seating and price levels for LSU Football Tickets at Tiger Stadium along with road and neutral site games, including the SEC Championship Game, as well as the College Football Playoff and National Championship Game tickets. Allow SecSeats.com to be your one and only LSU Tigers football ticket source. Geaux Tigers!

The Louisiana State University Tigers, or LSU, began their football history in 1893. LSU football claims 3 National championships (1958, 2003 and 2007), the Tigers were awarded an additional 5 National Titles however the University fails to recognize them. LSU has won 14 Conference titles and has a Heisman trophy winner, Billy Cannon in 1959. The Tigers are considered a National Power, consistently involved in the Southeastern Conference and National Championship discussion. LSU is currently coached by Les Miles whom has a record of 95-24-0 in his 9-year tenure with the Tigers. LSU is considered one of the top places to experience college football. Tiger faithful are passionate, with tailgating beginning days before the game and cuisine matching or exceeding most 5-star restaurants. The atmosphere of Saturday Night in Tiger Stadium or Death Valley is majestic.

The LSU Tigers completed the 2015 football season ranked at #16 in the AP with an 8-3 record. In his eleventh season, Head Coach Les Miles led the Tiger's to a post season victory of 56-27 over the Texas Tech Red Raiders in the AdvoCare V100 Texas Bowl in Houston, TX. LSU had a season full of highs and lows in 2015. They faced weather cancellations, rumors surrounding the fate of Head Coach Les Miles, and performances that left fans on the edge of their seats. The Tigers struggled in November suffering a three game losing streak against SEC opponents Alabama Crimson Tide, Arkansas Razorbacks, and Ole Miss Rebels. They closed out the regular season beating the Texas A&M Aggies 19-7. LSU came close to edging out Alabama for the top spot on National Signing Day, finishing ranked 2nd in the SEC by ESPN and 247sports.com securing 24 commits with 19 ESPN 300 -- the most in the SEC for 2016. New cornerbacks Kristian Fulton and Saivion Smith, along with key, star players such as Fournette, Harris, Adams, Dupre, Godchaux and new defensive coordinator Dave Aranda, could push LSU to the top this upcoming season. Success in the 2016 season will depend on whether or not LSU can become consistent at the quarterback position, where they have struggled for the past two years.

Les Miles and the LSU Tigers will play their annual Spring football game on Saturday, April 16th. In the fall, LSU football kicks off the 2016 season at Lambeau Field on September 3rd against the Wisconsin Badgers. The following weeks, the Tigers will host two homes games against the Jacksonville State Gamecocks and Mississippi State Bulldogs. They will battle the Arkansas Razorbacks in D.W.R. Razorback Stadium for the "Battle of the Golden Boot" on November 12th. Throughout the 2016 football season, the Tigers will also host the Missouri Tigers, Southern Miss Golden Eagles, Ole Miss Rebels, SEC West rival Alabama Crimson Tide, and the South Alabama Jaguars at home in Tiger Stadium. LSU will hit the road to Jordan-Hare Stadium to face the Auburn Tigers, Ben Hill Griffin Stadium against rival Florida Gators, and Kyle Field to battle the Texas A&M Aggies.

LSU Football tickets are always in demand with the passionate Tiger fan base. SecSeats stocks a comprehensive and abundant selection for all LSU Tigers Football games.

Tiger Stadium, also known as “Death Valley” was built in 1924 with a capacity of 12,000. Presently, Tiger Stadium is under going expansion expected to be completed for the 2014 Football Season with a new capacity of exceeding 98,500. Tiger Stadium was named “the scariest place to play” by ESPN in 2007. Legendary Alabama Head Coach, Paul Bear Bryant stated “Baton Rouge happens to be the worst place in the world for a visiting team. It’s like being inside a drum.” Death Valley is known for magical games being the site of the “Earthquake Game” versus rival Auburn in 1988, Billy Cannon’s Halloween Night Touchdown run in 1959 defeating rival Ole Miss and the stunning upset of the number 1 Florida Gators in October 1997. Tiger Stadium is unique in many ways including the “H” style goal posts and the yardline markers denoting every 5 yards compared to 10.

These two teams began competing in 1895. Of the 80 meetings, the Crimson Tide has a strong lead, with the overall series 50-25-5. The rivalry was increased since former LSU Head Coach Nick Saban left the Miami Dolphins in 2007 to become the Alabama Crimson Tide leader. The game became known as the “Saban Bowl”. In 2011, the two teams met in Tuscaloosa for the 2011 “Game of the Century” in which LSU defeated Alabama 9-6 in overtime in a fierce physical struggle. Following the completion of the regular season the two teams were ranked 1 and 2 respectively in the BCS and met for a rematch for the National Championship game. The game was won by Alabama 21-0 and the Crimson Tide was awarded the National Championship.

LSU-Ole Miss, now known as the “Magnolia Bowl” was first started in 1894. The Tigers and Rebels have met 104 times with LSU holding a 59-41-4 advantage. Often yelled throughout the stadium, a fan attending will hear “Go to hell Ole Miss” or “Go to Hell LSU” as the rivalry lives between these border state foes. Memorable games include the 1959 Billy Cannon’s Halloween run, 1972 Jones to Davis Touchdown pass dubbed as “The Night the Clock Stopped”, 2003 Ole Miss-LSU battle for the SEC Championship game birth when Eli Manning fell on the final play of the game, and the 2009 game LSU fans know as the “Clock it Game”. This year’s game will be played in Tiger Stadium in Baton Rouge on October 22nd.

Recently known as the Battle for the Golden Boot, with a golden trophy representing the states of Arkansas and Louisiana, this border war has featured exciting games in recent history. The team’s first meeting was held in 1901 and played 59 times with LSU holding a 37-20-2 advantage. The game historically has been played on the Friday following Thanksgiving however in 2014 the Razorbacks will face Missouri that weekend and LSU will face the Texas A&M Aggies on Thanksgiving night.

“Tiger Bowl” featuring the Auburn University Tigers and Louisiana State University Tigers or LSU has grown in significance in the past 20 years due to regularly being considered the SEC West Championship Game. Auburn and LSU have met 48 times with LSU holding a 27-20-1 advantage. Memorable games in this series have even taken on their own names including the 1988 Earthquake Game, 1996 “The Barn Burner”, 1999 Cigar, and 2007 “The Catch”. While enjoying these two SEC Powers collide, expect the unexpected.

The annual rivalry between both A&M schools has been rekindled with Texas A&M joining the Southeastern Conference in 2012. LSU and Texas A&M have met 54 times in which LSU leads the series 31-20-3. The series recently has been dominated by LSU winning the last 5 games following a long time off from the rivalry. This season’s game will be played on Thanksgiving Day in College Station.

Called “The Battle for the Rag” the LSU Tigers and Tulane Green Wave are each team's oldest rivals. The Tigers and Green Wave have met 98 times with LSU holding a 69-22-7 advantage. The annual football game between the two schools was last played in 2009 as LSU looked to add additional home games and Tulane became un-competitive. Tulane’s last victory was in November 1982. Both institutions’ agreed to play a future game in New Orleans which is yet to be scheduled. The LSU-Tulane baseball series remains intact despite LSU’s dominance in recent years.

Louisiana State University campus becomes a tailgater’s heaven on LSU football Saturdays. The entire campus is packed with pre-game festivities including some of the best seafood, gumbo, and food you will ever taste, in addition to plenty of adult refreshments. Popular places to tailgate include the Parade Grounds, the Quad, Touchdown Village, lots directly surrounding Tiger Stadium, and along Nicholson Drive. While attending a LSU home game make sure and see the “Walk Down Victory Hill” from the Golden Band from Tigerland and visit Mike the Tiger's habitat between the Pete Maravich Assembly Center and Tiger Stadium.